Learn Where and How To Catch Barramundi.
It's Not That Hard.

The Barramundi fishing in the Kimberley is the best. Period. 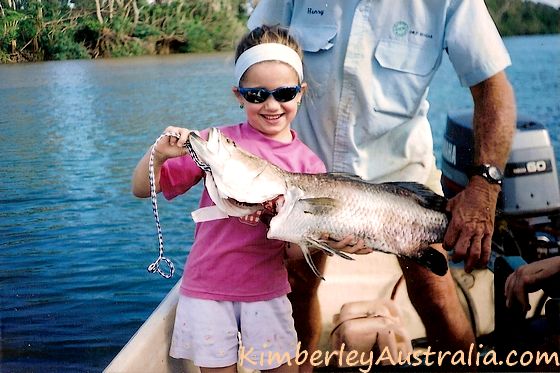 
Young Brooke has no trouble catching them!

Don't worry if you don't know all that much about Barra fishing.

You'll catch one here, we'll make sure of that. If you want some expert guidance you can get that. There are many excellent Barramundi fishing tour guides and great fishing camps or lodges along our tidal rivers and on the spectacular coast.

Have a look at that picture. That's Danae, my late mate Henry's granddaughter.

Danae caught that Barramundi herself. 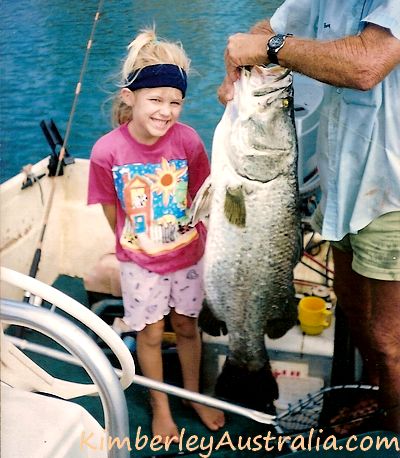 Danae and her first barra

No kidding. It's nearly as big as she is and granddad has to hold it for her, but she hooked it and she brought it in all by herself. If Danae can do it, you can.

A Bit About Barramundi Fish

Our Barra are world famous as a game and sport fish, and they are prolific all across the Northern Territory and Kimberley coast. Their full range extends from Shark Bay in Western Australia across the top and down to the Mary and Maroochy river systems in Queensland.

Barramundi fish live in a big variety of locations (I'm telling you, it's not that hard...). They're in the open water, in creeks, estuaries, rivers, billabongs...

Barramundi are predators and love to hang out near rocks and logs, where they can hide and wait for unsuspecting smaller fish or crustaceans (and laugh about anglers who snag and lose their lures there).

The Barramundi is a big fish. It can weigh 10 to 20 kg and more, and a length of over 1 metre isn't uncommon. Its maximum size is 1.8 metres and it will then weigh about 60 kg.

Their reproduction is somewhat unusual. All Barramundi fish start out as males. It takes them about three to four years to mature.

Then, after another year or two, usually at around age five, they change gender and become female. So the small fish you catch are male. The bigger the fish the more likely it is to be a female.

The females produce eggs which hatch within 20 hours and the larvae grow rapidly. It takes a Barramundi fish about three years to reach the minimum size at which it is legal to keep them: 55 cm.

At six years of age a Barramundi fish will have reached a size of over 80 cm and will almost certainly be female.

For that reason you find that in areas that are heavily fished you are not allowed to keep Barramundi over 80 cm. It's catch and release so future generations of anglers will still be able to go Barramundi fishing.

If you catch a big fish and intend to release it handle it very carefully. Use a landing net without knots to lift it out of the water, and return it into the water as soon as possible. 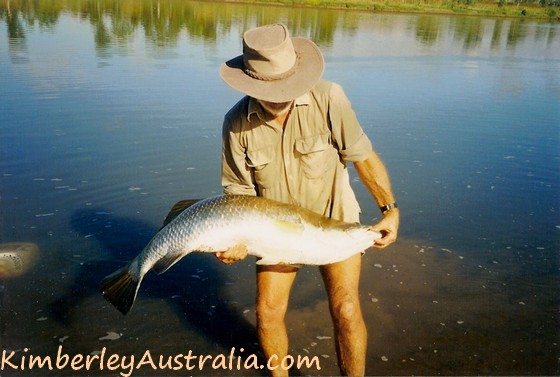 Please be careful when taking pictures. Barramundi are susceptible to being "stretched" when you hold them by the mouth or the gills. In other words, it is something they rarely survive. Only do that to fish that you intend to keep for the table. 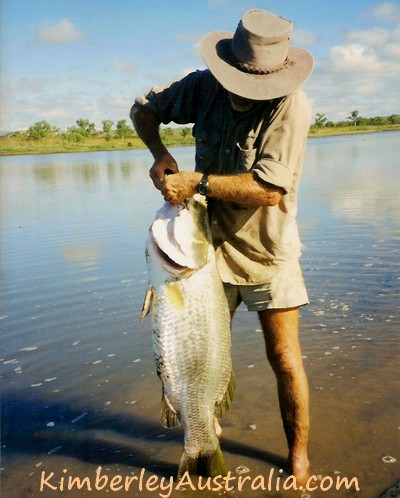 So What's So Difficult About Barramundi Fishing? 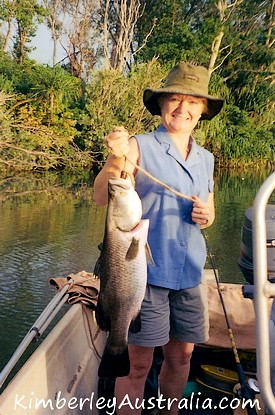 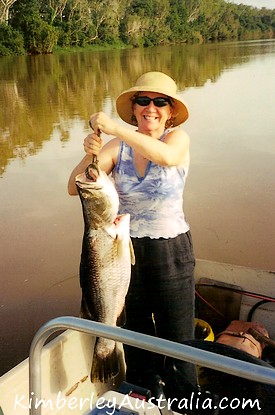 Nothing. Just ask Danae. As with all fishing, the secret to a successful Barramundi fishing trip is mostly being in the right place at the right time. And of course, as soon as you think you have things figured out the fish change the rules... But you knew that, didn't you?

Barramundi fishing is so popular with sport fishers because of the Barramundi's - justified - reputation of being a great fighter. High leaps, strong runs, and an uncanny ability to get off the hook, no matter how safely you thought you had them...

(Little Danae hooked a second, much smaller fish after that big one, and she soon called out for help:
"Granddad, can you hold the rod for me? My arms are hurting!"
No wonder they did...)

All in all, Barramundi fishing means thrills and action. 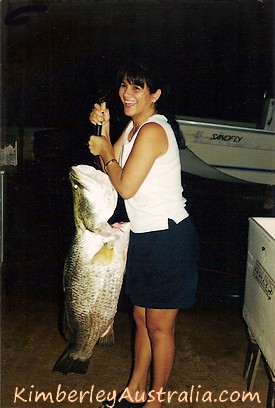 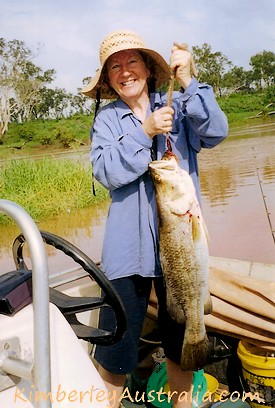 To experience that thrill however you have to get the basics right. Luckily Barramundi aren't fussy eaters. They love live bait (mullet is popular) but also respond very well to all kinds of lures and even take dead bait.

Large minnow-type lures work well in the shallows. Around snags lures that get down to two to four metres can be very effective and they also work well for trolling big rivers. The noisy popper or fizzer style lures work too and are good for night fishing. Also very popular with anglers here are the soft plastic lures, so they must be popular with the Barramundi.

The colour of the lure (according to Henry's wisdom) is up to the angler. You like red and white? Go for red and white... (I myself like the silver and golden ones.)

You can also go Barramundi fishing with heavier fly gear (but I don't know much about fly fishing, I just know you can catch Barramundi that way.)

Barra are around all year, but they hang out in different places at different times of the year, and they are definitely more plentiful during the warmer summer months.

You need to put in a bit more effort if you want to land a big one during the dry. The colder the water the harder it gets.

Where To Go Barramundi Fishing 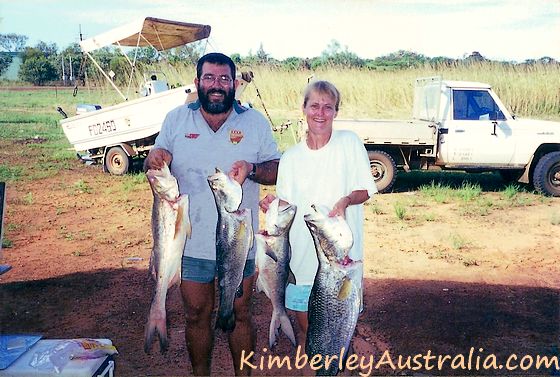 Try Willie Creek and Barred Creek and the other northern beaches (along the Manari Road, which you reach via a turn off from the Cape Leveque Road).

Many of the bush camps along the Cape Leveque Road (ask your local hosts for advice and directions), even Hunter Creek at Kooljaman Resort/Cape Leveque.

The Fitzroy River (access through Yeeda station, there are several places along the river, ask for directions at Willare Roadhouse), Tumblegoodiron, Willare Bridge, Myroodah Crossing.

Close to town are Ivanhoe Crossing and also the Lions Park boat ramp. (Turn right after crossing the Diversion Dam. A good spot is the mouth of the Dunham River just a few metres below the boat ramp, provided the Dunham is flowing. If not, try the rocks right below the dam.)

Several sites along the King River, Pentecost Crossing. And of course the gulf itself and any of the creek or river mouths there, but you need a bit more than a dinghy to get there!

Other than that: Kalumburu and anywhere on the coast if you can get to it.

Happy Barramundi fishing and I hope that you'll join us soon here at the Metre Club! 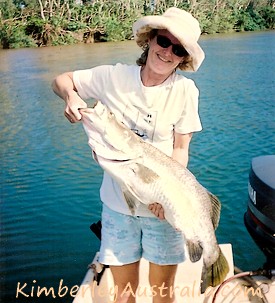 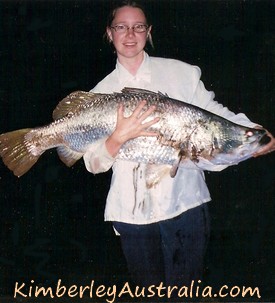