View from the top of Little Mertens Falls

We stayed 6 nights at the Mitchell Plateau campsite, left for provisions and came back for 2 more. No one else did – came and went in a day or two nights at most. Some groups just get bused in for the helicopter flight and then go again.

When we arrived (June 15th) it was very busy and the campsite didn't feel spacious at all – two tours (one Dutch/German) and a bikers' expedition and plenty more. Two days later there were just 6 vehicles in the quiet area when they'd all gone somewhere and it was really peaceful and quiet (you get used to the chopper coming and going).

That night there were two new tours camped either side of us, but they'd gone again soon enough. The times we left we met a dozen vehicles coming in up the road, made us glad to be going in the other direction.

Yes, it's $6.50 per person per night, but no park fee collected. They are about to spend $300,000 improving the toilets. We didn't like the look of the still water at the collection point so filled up from the fast flow at the crossing, just upstream from the bathing area. It tasted good and we had no ill effects without doing the recommended boiling.

We went to the Mitchell Falls twice, ten days apart. You really noticed the drop in water level. The second time, you could wander about in the river between the crossing and the falls, something you wouldn't have dreamed of doing first time.

If you swim up river there's another waterfall just round the corner and you can go exploring. First time, we had a nap in the rock pods next to the falls across the river, right in the thunder and spray. 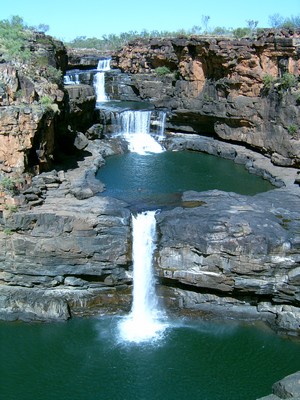 The path up over the ridge to the Mitchell Falls lookout soon disappears. You have to cross the dried up river bed/waterfall and go right to the cliff edge.

If you follow the path marked on from here, you soon lose the markers again, but if you carry on right to the cliff again, that's where you get the full frontal view as in the photo on the right. It's not far.

The Mitchell Falls are spectacular but there's a whole different world between the campsite and the falls...

We spent the days at different points along Mertens Creek, sitting in the shade, swimming in pools, napping on rocks (surprisingly comfortable), exploring, reading (The Lost World of the Kimberley – good book: the ranger said he read half of it and decided the guy was a crank, but I read the lot and was impressed and I'm a history graduate).

We came upon a large lizard on a rock at the bathing pool. Watch out for the baby frogs at the pool with the rock art near to Mertens Gorge. The view from the top of Little Mertens Falls was my favourite – gazing down at our private swimming pool and across to a vast landscape. It didn't matter that people and helicopters came and went. We were just idling away the time in paradise.

If you spend enough time there to stop doing and just be, you slip into a different space and time...

Join in and write your own page! It's easy to do. How? Simply click here to return to Mitchell Falls.