To be honest, I've never been a big fan of Halls Creek itself and prefer to camp out of town. Because the country surrounding Halls Creek is some of the most beautiful along the Great Northern Highway, and there are several magnificent places just out of town where you can camp for a night. Or for several nights... 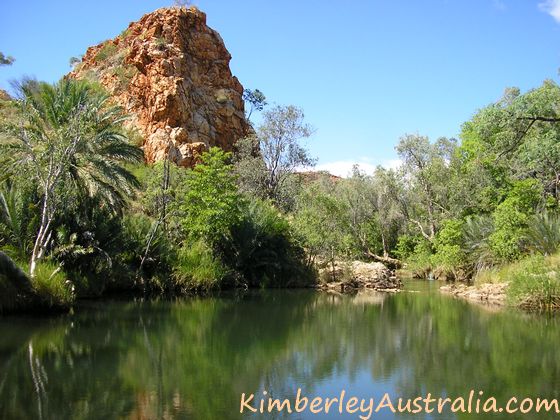 
Of course, if you aren't set up to go camping you will want to spend a night in Halls Creek. There are several accommodation options from four star to camping.

Halls Creek has a nice tourism information centre, an eight million dollar swimming complex and the motels are nice and welcoming. So are most people in town. Lots of work and money has been invested in the last couple of years to make the town more welcoming and tourist friendly.

But it's still a bit of a love it or hate it town. Halls Creek can certainly appear a bit rough at first glance, but talk to any long term residents and you will find that they have a very different image of their town. Unfortunately, as so often, the charming side of Halls Creek takes some time to discover, time that few people can take.

The first explorer to survey the area (1879) was Alexander Forrest, the man who named the Kimberley. He reported about the excellent potential of the Kimberley as cattle grazing country, but he overlooked another opportunity. It was his brother John Forrest who noticed signs indicating that there may be gold.

The first two men who went looking for gold shortly after (Adam Johns and Phil Saunders) didn't have much luck, though they did find a few ounces.

In 1885 two other men arrived in the area, after sailing to Derby, travelling up the Fitzroy River and then across to the Elvire River. They stumbled over gold just about everywhere. Their names were Jack Slattery and Charlie Hall. (Halls Creek was named after Charlie.)

A short but intense gold rush followed. That's rush with a capital R. Officially the gold was discovered on July 14 1885. It was only weeks after word about the first gold discovery in WA was out that men from as far away as New Zealand arrived. Men walked across from Queensland! The newly established ports in Derby and Wyndham boomed as thousands of miners poured into the region.

And within the blink of an eye it was over.

Gold had been discovered in the south, (in Coolgardie to be precise,) which was a lot easier to reach and nowhere near as inhospitable and harsh as the north. Halls Creek was a ghost town by 1888.

Nothing much happened over the next 50 or so years. At least nothing much that history books consider worth mentioning. But if you dig around a bit you will find a plethora of riveting stories about the hardships and the heroism of the early pioneers, like the story of the young stockman Darcy (his grave is the most famous in Halls Creek's graveyard). You can read his story, and more about Halls Creek's history, here.

Since the end of the gold rush Halls Creek has existed as a service centre for the surrounding cattle stations and for the traffic passing through. That's still the case today.

The historical Halls Creek town site was eventually abandoned. Lack of water was one reason. (How people managed to survive there without a water source is a mystery.)
But the main reason was the re-routing of the main road, today's highway. The move to the new site, only 15 km away, started in 1948 and was completed in 1954.

Today the ruins of the original town site are a tourist attraction even though there's not much to see. You used to be able to forage around among the ruins, evoking the ghosts of days gone by, but no more. All the ruins are now covered and fenced off. It significantly reduces the appeal of the site but the protections was necessary to preserve what's left.

There is not much to say about the new Halls Creek.

The main road, which is the highway passing through, features the nice and modern tourism information centre, a couple of service stations, a small supermarket, a great butcher, a bakery, a take away, and... and that's it.

The population of Halls Creek fluctuates a lot. Apparently it is around 1300 but I imagine that number would include all the surrounding cattle stations and Aboriginal communities. The town itself is a lot smaller and the population is mostly Aboriginal. Halls Creek faces the usual problems of alcohol abuse, domestic violence etc. that you also find in other Western Australian and Northern Territory communities.

Having said that, the very strict alcohol restrictions have greatly reduced street drinking, disorderly behaviour and all the associated noise and trouble that you may have read about.

And as I said in the intro, the motels are really nice, the people are nice, you absolutely can spend a very pleasant night here.
(I just think it's much nicer outside Halls Creek.)

Click on the map image below to get to the full sized version from the Halls Creek Tourism website. The file is a PDF so you can print it.

It shows everything of interest. (That's mainly the roads out of Halls Creek).
The Duncan Road leads to the old town site and the best camping spots.
The accommodation options in town are all marked. 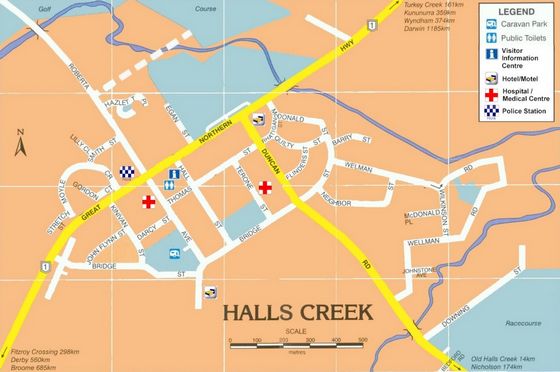 The main thing that Halls Creek has going for it is its location. It is still as essential a stopover point for travellers as it has been for the last 130 years, and the surrounding country is beautiful.

The turn-off for the Tanami Road and the Wolfe Creek Crater is only 16 km to the west, the turn off to Purnululu National Park is 107 km to the north-east.

Things to do in town? You can explore the town and its history on a self guided walk. Dotted around town are nine wooden totems explaining aspects of local history and culture in word and colourful art. If you follow the totems you will also visit important historic sites. Grab a Heritage Town Walk brochure at the Halls Creek Visitor Centre to guide you and allow about 40 min.

To admire or purchase some of the internationally renowned Aboriginal art of this region check out the Yarliyil Arts Centre. (Access from the Visitor Centre.)

For a nice sunset view over Halls Creek take the short drive to Moola Bulla Lookout.

If you need to spend a night in Halls Creek you will probably find yourself at the Kimberley Hotel or the Halls Creek Motel.

There is a caravan park in town and then there is also the Halls Creek Lodge. The lodge is near the old town site, and when you first get there you will see a hill with car wrecks and abandoned machinery parts strewn around. That's it.

Don't be scared, drive up. There is a caravan park over several terraces and it also has air-conditioned budget rooms and a restaurant. Everything is a bit rough around the edges, and if you usually only stay at neat Big 4 parks this may not be your cup of tea. I don't mind it out here. It's nice and quiet, away from town, and the views are great.

Six kilometres out of town is the China Wall, which is a bit of limestone sticking out of the ground. It rises from the creek at the bottom (which is a nice spot for a swim during the wet season) over the side of the hill and looks like a miniature version of the Great Wall of China.

The historic town site Old Halls Creek has already been mentioned. It's on the same road, the Duncan Road, and is a 15 km drive from town. 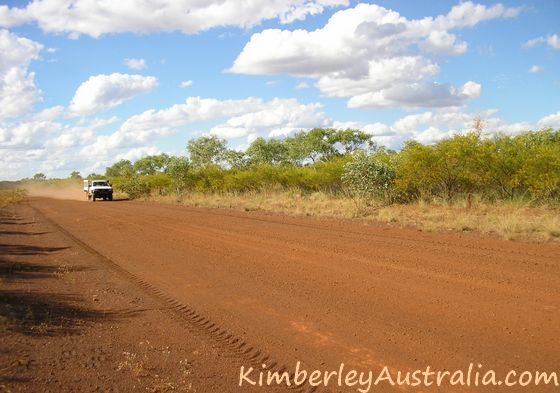 On the Duncan Road

However, for most people the biggest reasons to come out here are the swimming holes and free bush camp sites.

If you are set up to bush camp I would recommend that rather than staying in town you choose one of the places further along the Duncan Road: Palm Springs, Caroline Pool and Sawpit Gorge are all nearby.

Read about other Kimberley Towns

Read about other Kimberley Towns