Crocodiles In The Kimberley

How To Be Crocodile Safe In The Kimberleys

The Western Australia Kimberley is crocodile country, you probably know that already.

I don't want you to get eaten by a crocodile on your Kimberley holidays, so please don't do anything stupid while you're here. 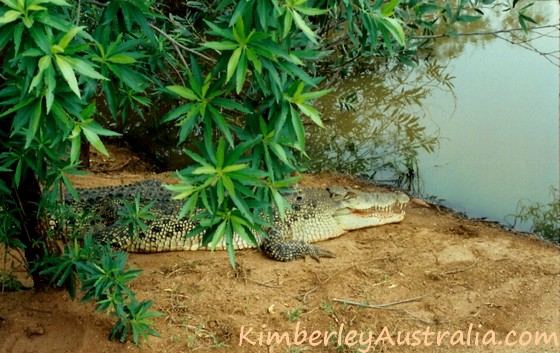 A saltwater crocodile on the bank of the Ord River in the Kimberley, WA.

Saltwater crocodiles are the largest reptiles in the world (in terms of weight). They can grow to over 6 metres (the one pictured above is only about 2.5 m) and their jaws can exert a pressure of several tons. They are huge, territorial and aggressive, and they are plentiful across the Kimberley.

Can you see what I'm getting at? Put all the above facts together, add that the number of Kimberley tourists and residents is growing as well, and you can see how the potential for conflict is increasing. So please, be Kimberley crocodile safe and observe the following rules.

Be Crocodile Safe In The Kimberley 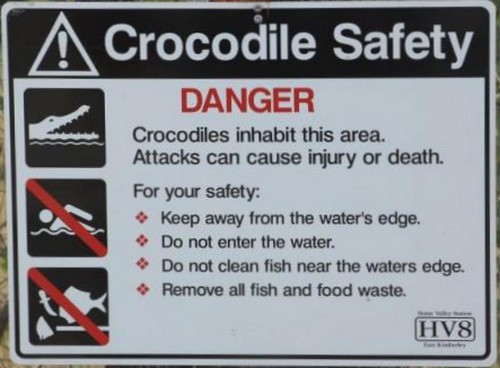 This crocodile warning sign is near Home Valley Station in the Kimberley.

Having said that, there are plenty of places in the Kimberley that are crocodile free and safe for swimming. (Just have a look at all the gorges and waterfalls...)

I don't want you to get the impression that the crocodiles own all the water up here. But if you don't know an area it is very important to find out first where swimming is safe and where it isn't.

You don't need to avoid areas just because crocodiles live there. You just need to act sensibly around crocodile infested waters.

Fishing is very popular in the Kimberley, and any great barramundi fishing spot is guaranteed to be popular with saltwater crocodiles as well!

I know of two different saltwater crocodiles, one in the lower Ord River, and one in the ocean out of Wyndham, that have become a nuisance because people kept throwing them fish scraps. They are used to being fed.

One of them has attacked a boat and taken a chunk out of the prop.

In another attack in the same area a man was grabbed on the shoulder while leaning over the side of the boat to clean fish. No further comment.

(The other crocodile, the one in the Ord River, features in one of the incidents below...)

Camping near the Kimberley coast or tidal rivers can get you into trouble too...

The first one happened at the Pentecost River. In 2005 a couple spent one hell of a night when a crocodile marched up to their tent and grabbed and shook it. Terrified they clawed their way out of the back of the tent and spent the rest of the night on the roof of their car, with the spotlights on. With the result that the battery was flat in the morning and they couldn't leave. (They were rescued later.)

A friend of mine, camping at the lower Ord River near Kununurra, thought he was doing the right thing by keeping all the fish scraps in a bucket. He woke up the next morning to find a crocodile had marched through the camp and helped itself to the scraps anyway...

I want to repeat again that this is NOT at all a natural behaviour for crocodiles. These crocodiles had both been trained to connect human camps with food, by all the fishermen who over the course of many years camped there and discarded fish scraps into the water.

Please, when you visit us, and especially when camping or fishing, be Kimberley crocodile safe!