Meet the Animals of the Kimberley Region

Kimberley wildlife is varied and plentiful. But to most travellers that's not immediately obvious. If you are only looking for big mammals you will not find much. At least not much native Kimberley wildlife...

In fact, many of the most obvious wild animals in the Kimberley are feral escapees that don't belong here: stray horses and cattle, wild donkeys, camels, pigs, buffaloes and cats all do a lot of damage, as they do in other parts of Australia. 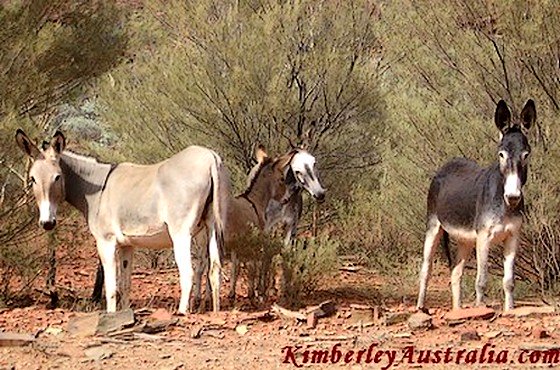 The dingo is a special case. 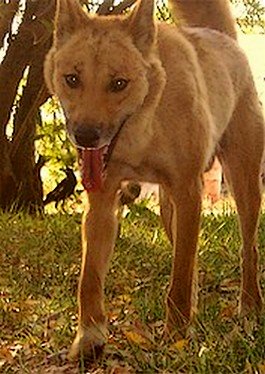 The dingo arrived in Australia so long ago that it is regarded as native. Pure dingos are still common in the Kimberley but are unfortunately viewed as a pest by many, hunted as such, and as a result are shy and not seen all that often.

This lady on the right is an exception. Luca leads a happy life on Mt. Hart Station in the Leopold Ranges Conservation Reserve, an excellent place to get up and close to wild dingoes.

Like the dingo, most of our native Kimberley wildlife is found in other parts of Australia as well, especially across the north and in the Northern Territory.

We have nine species of kangaroos/wallabies. You may occasionally see a big red on the southern edges of the Kimberley, but most of the hoppers you see during your drives will be either Agile Wallabies (also called Kimberley Wallaby) or Antelopine Wallabies. 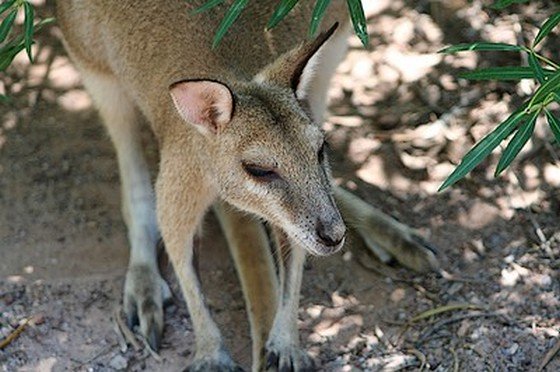 If lucky, you may also spot some of the smaller rock wallaby species while hiking rocky slopes or in the cliffs of the gorges.

You are almost guaranteed to see rock wallabies on an Ord River cruise or a cruise on Lake Argyle. 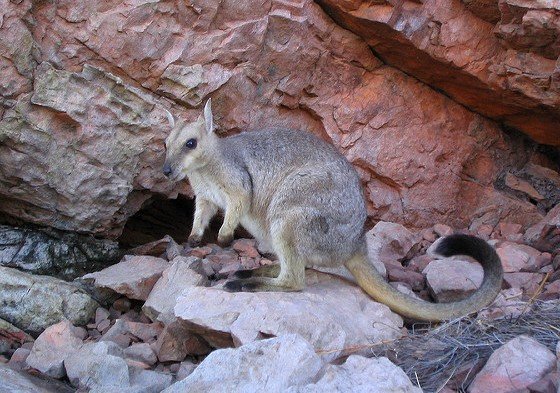 The smaller mammals that call the Kimberley home are harder to see. There is a range of "rats" which are not related to rats at all but are also marsupials. But being of rat size and on top of that often nocturnal, they are difficult to spot.

Other rarely seen mammals include the Dunnart, the Marsupial Mole and the Bilby. 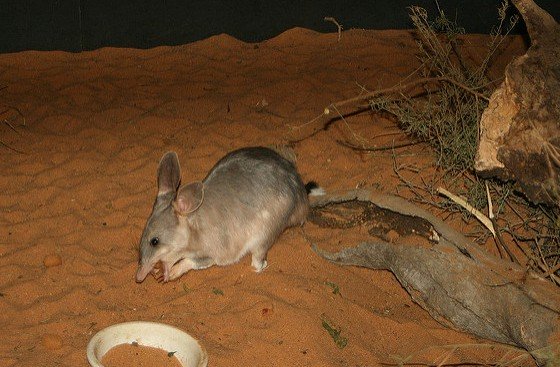 Bandicoots and Quolls are still fairly common, though not very visible.

Although Echidnas (Spiny Anteaters) can be found all over the Kimberley, they are also not seen all that often. 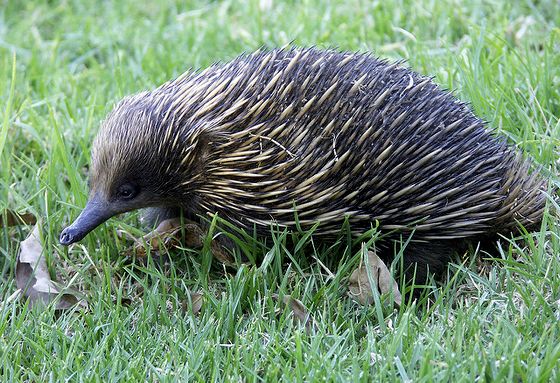 Our most famous native animal would have to be the saltwater crocodile. Don't miss out on visiting one of the crocodile farms, either in Broome or in Wyndham, to get a close look at those massive, ancient creatures. After joining a feeding tour you may think twice about swimming ANYWHERE here.

One reptile species you are almost guaranteed to see is the goanna or monitor lizard. The most common out of the nine species in the Kimberly is the large Gould's or Sand Goanna that you often see crossing roads (though you don't often see them THAT big)... 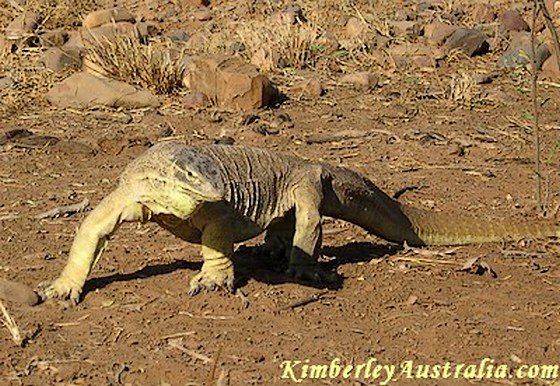 Also very common is the Mitchell's Water Monitor, often found sunning itself on rocks and logs at creeks, gorges and water holes. 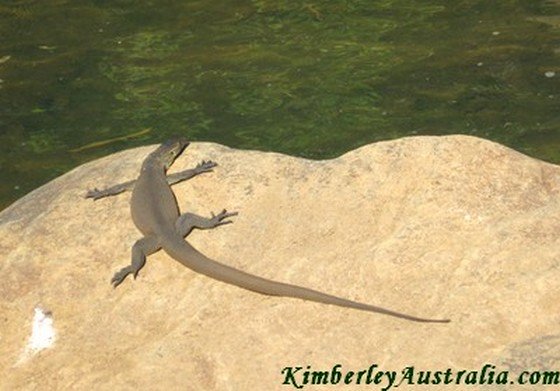 A water monitor is sun bathing on a rock ledge.

Of our 28 dragon lizards the Frilled Lizard is the most famous. It's also very common. You will most likely see it sitting on the road. This tree dwelling lizard is very well camouflaged and hard to spot in the bush. 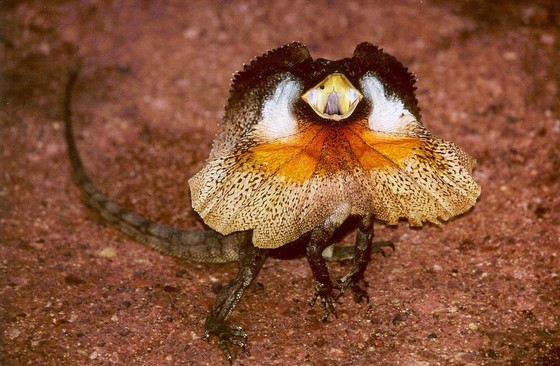 Blue tongue lizards (of the skink family) can be found in gardens and plantations and any other areas with moist soft ground and lots of leaf litter etc.

Two of several Blue-tongue Lizards living around my house.

The geckos that you find in houses are mostly of an introduced species, the Asian House Gecko, but many native geckos can still be found in the bush. The introduced geckos don't seem to like the bush much.

Another Kimberley native that has also adapted very well to living in houses, mostly bathrooms and toilets, is the always smiling and always relaxed Green Tree Frog. 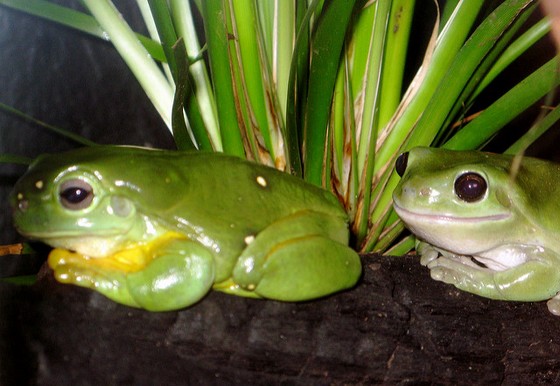 Yes, we also have snakes in the Kimberley. The most common are the highly venomous King Brown or Mulga Snake (easy to recognise by its boofy head, the non-existent neck and the large, dark rimmed scales)... 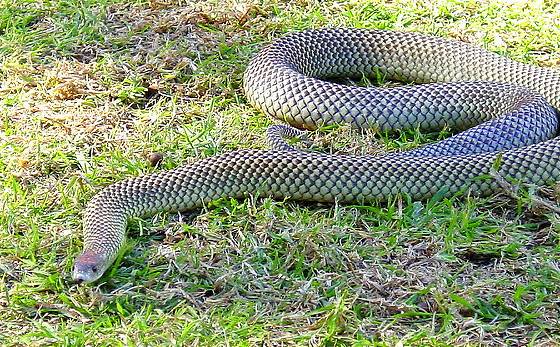 ...the huge Olive Python (can grow to over 5 metres), the beautiful Black-headed Rock-python... 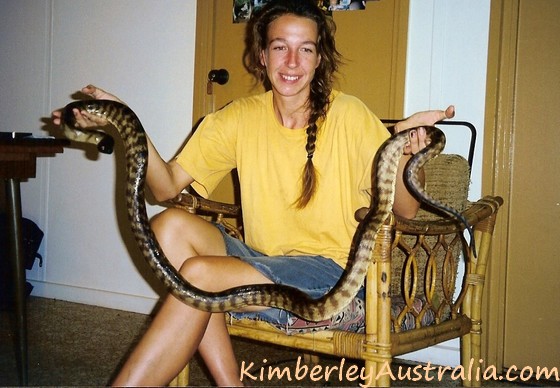 Our rock pythons grow only to about two metres.

...the small Children's Python and the Common Tree Snake, a golden coloured snake with a blueish-green head. The pythons and tree snakes are non-venomous and completely harmless, but especially the bigger ones can still bite if you annoy them! So better just leave them alone.

If you see something that looks like a snake head, sticking out of the water of a slow flowing creek or a billabong, it is likely a Snake-necked Turtle, a very common freshwater turtle. If you see a turtle on the coast you are most likely looking at a Green Turtle. This is the most common sea turtle in the Kimberley, but all six Australian sea turtles can be found on our coast.

Over 300 species of birds can be found in the Kimberley and it's hard to know where to begin.

Generally overseas visitors are most interested in the colourful parrots and cockatoos. You should be able to see Red-winged parrots and Rainbow Lorikeets... 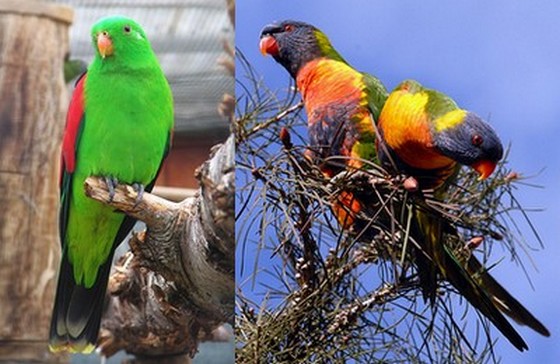 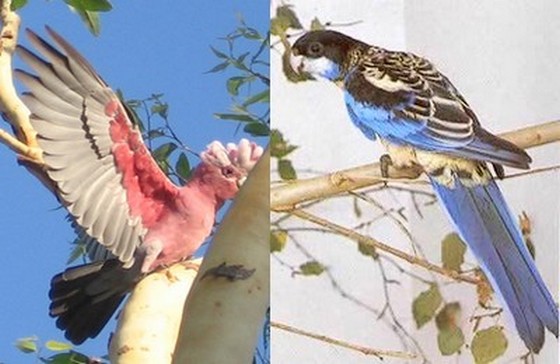 Also plentiful are Sulphur-crested Cockatoos (the noisy, white ones) and the magnificent, huge Black Cockatoos (red-tailed and yellow tailed ones are available). 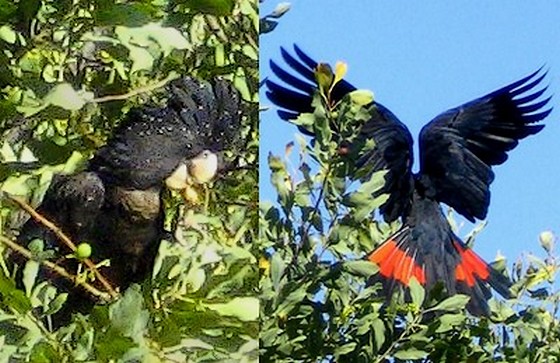 Conspicuous large birds are the beautiful Jabiru, Australia's only stork... 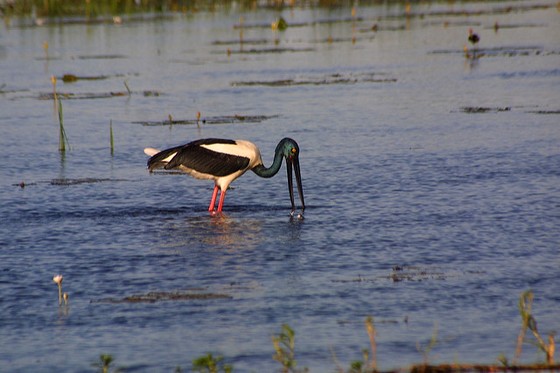 ...and the Brolgas, which often congregate in very large flocks. 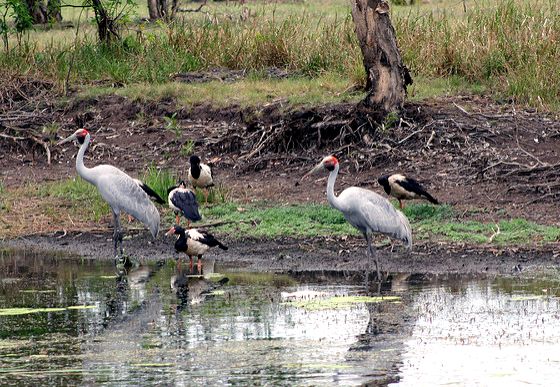 Also found near water are herons, egrets, ibises and bitterns as well as a range of geese and ducks. Magpie Geese (also in the photo above) and Whistling Ducks are the most common, and the characteristic voice of the ducks can often be heard at billabongs.

What else are you likely to see? The iridescent Rainbow Bee-eaters are acrobatic hunters... 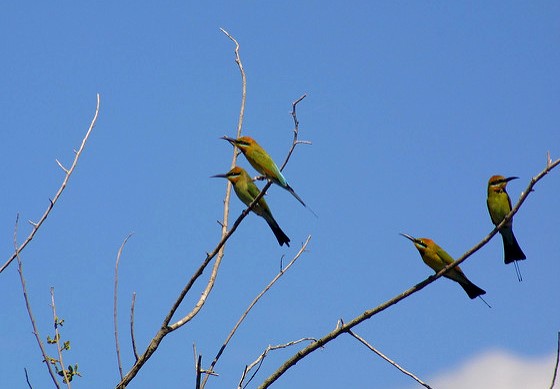 ...and the Great Bowerbirds are clowns. (Don't leave any keys, coins, jewellery or similar lying around if you see bowerbirds!) Just as funny to watch are the large family groups of energetic and always busy and noisy Silver-crowned Babblers.

Blue-winged Kookaburras often make a huge racket in the evenings. If you hear a beautiful deep warbling instead, look for the glossy black head of the Pied Butcherbird. 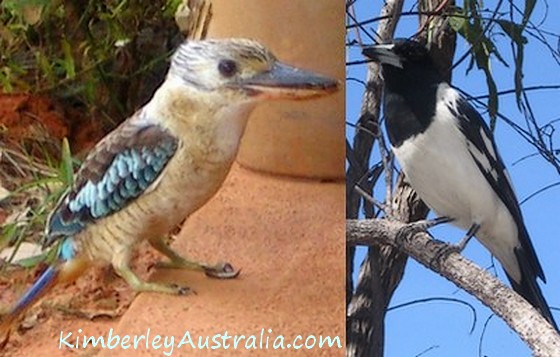 The Sacred Kingfisher is a migrant and lives in the Kimberley only for the wet season. 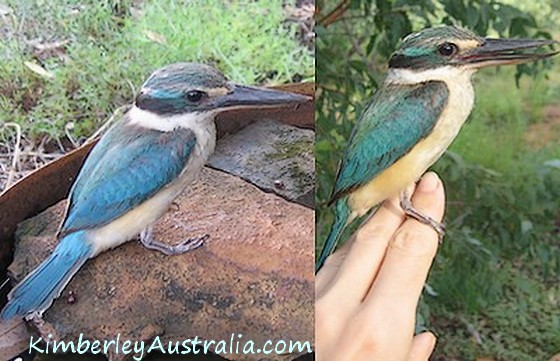 (The one in the photo is not tame at all. He just has a monster headache and is feeling rather dopey after flying into my glass sliding door...)

A common member of the pigeon family is the Spinifex Pigeon with its distinctive feather spike on the head. 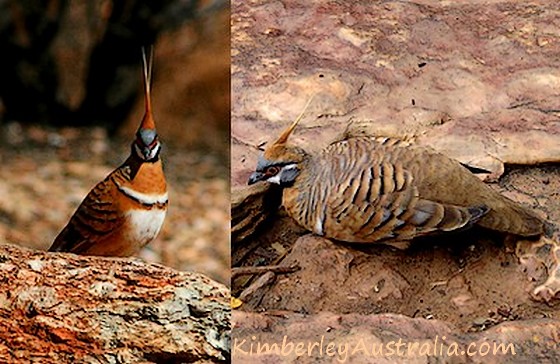 We have many other doves and pigeons as well. There is also a huge variety of finches, wrens, honeyeaters in short, we have lots of everything.

ALL Australian species of birds of prey have been recorded in the Kimberley. Consider that the Australian Atlas of Birds lists 760 species and that over 300 of those can be found here, in this one small corner, and you will rest assured that the birdlife in the Kimberley will not disappoint.

The wetlands of Lake Argyle, Lake Kununurra and the now permanent flow of the lower Ord River are a haven for birds and the area is accessible and easy to explore. Parry Creek Nature Reserve near Wyndham is another birder highlight in the same area.

Other good areas are the Point Spring Nature Reserve north of Kununurra and the rainforest pockets on the Mitchell Plateau.

And last but not least there is of course the world's top shorebird and wader location: the Broome Bird Observatory on Roebuck Bay.