Tunnel Creek National Park is one of my three favourite national parks in the Kimberley. I recommend you do not skip this one!

The small and unusual park is not far off the beaten track, you don't need a four wheel drive to get there and it's great fun to explore. 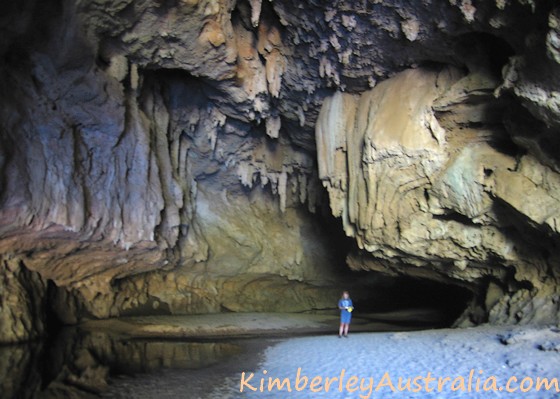 Inside the tunnel at Tunnel Creek National Park

Tunnel Creek National Park covers all of 91 hectares in the Napier Range, a range that can also be seen at Windjana Gorge. It is made of limestone and is what remains of an ancient reef system which existed here in the Devonian period (that means 350 - 375 million years ago).

The main feature of the park is of course the 750 metre tunnel that a creek has worn through the Napier Range. The tunnel is the oldest cave system in Western Australia. It became famous in the late 1800s. Aboriginal leader and "outlaw" Jandamarra (better known as "Pigeon") was using the "Cave of Bats" (also called "Pigeon Cave" = Tunnel Creek) as his hideout. After years of playing hide and seek with the police he ended up being killed in front of it, by another Aboriginal tracker, in 1897.

You can read Pigeon's story here. 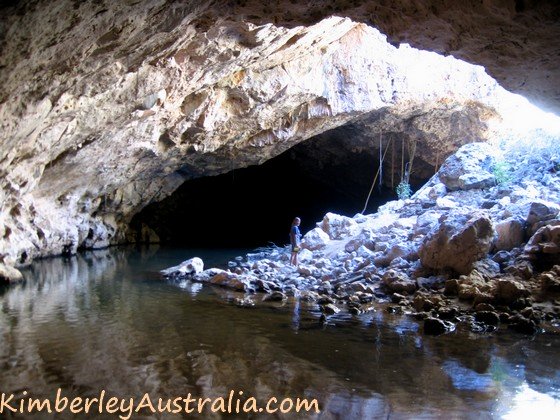 Halfway along Tunnel Creek a hole in the ceiling lets in the sunshine.

If you don't like camping then you are in for a pretty long day...

You can reach Tunnel Creek from either Derby (180 km) or Fitzroy Crossing (115 km). No matter from which side you approach, it will take you two to two and a half hours, as a big part of the trip is a corrugated dirt road, the Leopold Downs Road.

The Leopold Downs Road connects the Great Northern Highway with the Gibb River Road. You can use it to cut across from one to the other and visit Tunnel Creek and Windjana Gorge on the way.

Not driving yourself? There are day tours from Fitzroy Crossing or Derby. Just contact the Kimberley Tourism Information Centre there.

Tunnel Creek National Park is a day use only park. It has a small parking area, an information shelter, a bush toilet, and ... that's pretty much it.

A short path takes you to the entrance of the cave, and I find even this short walk and the entrance quite impressive.

The wall of the Napier Range is towering above you and you have to climb over and squeeze between big boulders to get to the cave. 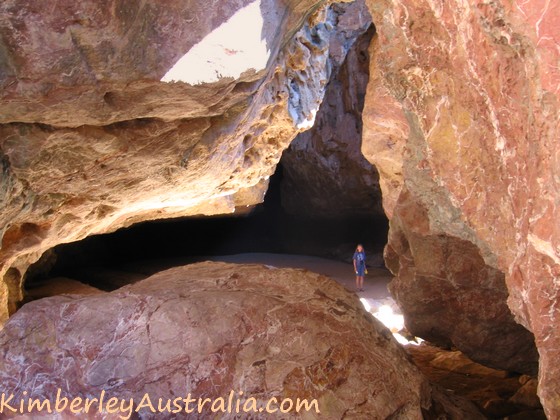 At the entrance you need to squeeze past these boulders to enter the cave.

The opening is like a big hall in the rock. At the back of it the tunnel starts. If you are one of those people who don't like tight spaces and think they might get a bit claustrophobic you don't need to worry.

The tunnel is dark, but it is very spacious. Huge, actually... 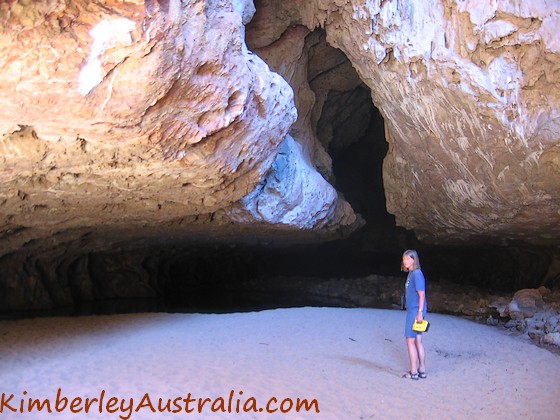 The start of the tunnel 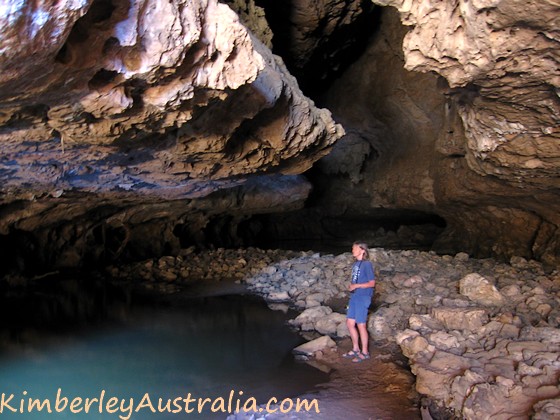 The tunnel is much bigger than it seems in this photo.

There are several permanent pools of water on the ground that you will have to wade through.

At the start of the dry season they can be quite deep, and in the middle of the season they are very chilly.

You won't get out of wading, so make sure you wear shoes that can handle it.

For some reason most information materials make the standard recommendation of "sturdy walking boots".

My recommendation is, if you like your boots, leave them in the car. Take some sneakers or plastic sandals or the like. 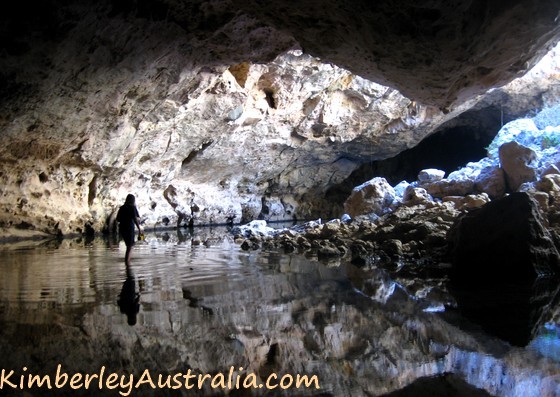 Most pools in the tunnel are very shallow and easy to wade through.

But most importantly, take a good torch.Many people use a little headlamp instead. Those are good, too. Whatever you use, take something with fresh batteries.

Don't forget to shine your torch around the walls and the ceiling lots. There are little waterfalls coming over the ledges on the sides and huge stalactites are dangling from the ceilings. 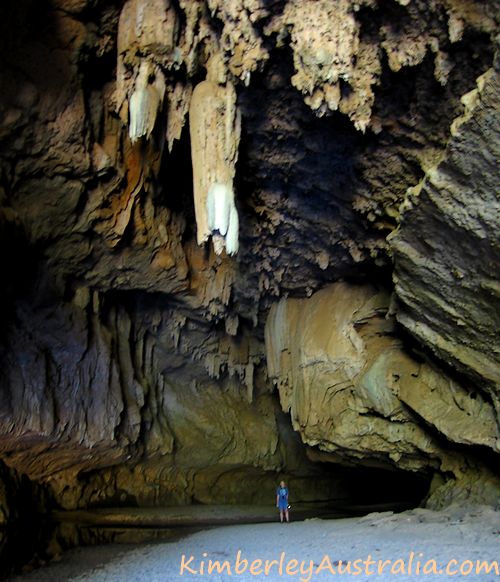 The impressive ceiling of Tunnel Creek

About a third or half of the way the ceiling has caved in so you get a break and some daylight. Little bats are flitting in and out of the dark and tree roots are growing through gaps in the ceiling. 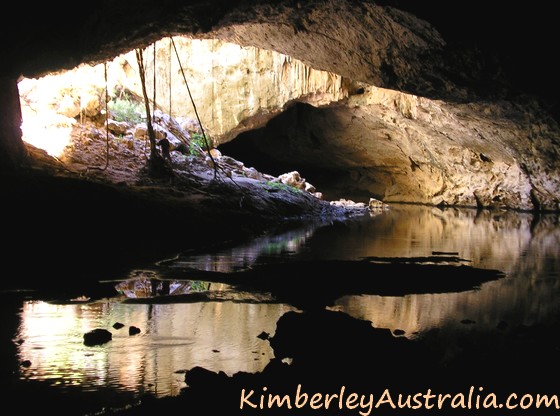 Half way along Tunnel Creek

And then it's back into the dark ...
Remember to also shine your torch into the - somewhat murky - water. You can discover many interesting things in there as well.

There are fish and apparently the odd little freshwater crocodile (harmless, just don't try to pick them up,) and also something that ... well, I never found out what it was. Something like an eel or a water snake. Hey, it was dark, and as I said, the water was a bit murky because other people had already walked through it. So I lost it and couldn't find it again. I would love to know what it was.

(A reader has since let me know that he saw a black eel in there. So I guess that's what I saw, too.)

It's really nice to come out on the other side of the range. The sun is shining, the birds are chirping, the creek is murmuring ... Sure, they were doing all that before as well, but you seem to enjoy it a lot more after having spent some time in the cool dark tunnel.

(Which you then have to wade through once more. There is no path over the top of the range, only under.) 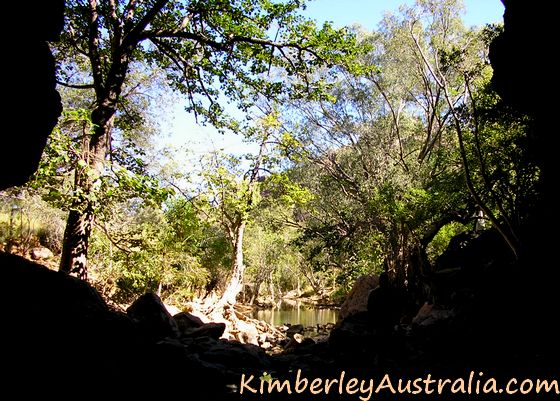 The end of the tunnel

All in all this is a fantastic little trip and great fun. Whenever I get a chance to talk to travellers who have done the big once around the Kimberley trip I ask what they enjoyed most. If they've been to Tunnel Creek they always mention it as one of the top things they did.

So make sure you pack that torch!